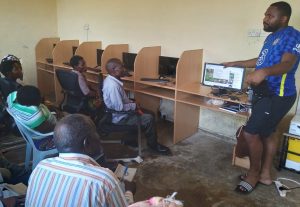 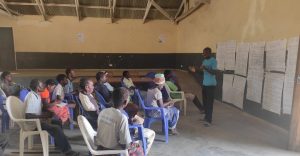 Persons with disabilities in the area of Traditional Authority T/A Chapananga in Chikwawa District have all reasons to express their joy as they are undergoing the disability rights training conducted by FEDOMA with support from the Hunger Project.

According to Innocent Dula, The Hunger Project Field Officer for Chikwawa District, persons with disabilities always look down upon themselves as they cannot think of ways that can make them not to be seen as inferiors in their communities by fellow persons without disabilities.

“ We have decided to come here with the FEDOMA officials who are going to equip persons with disabilities with the knowledge of human rights that can also help them to remain self-reliant in their livelihood,” Said Gomani.

Apart from attaining the human rights trainings, Persons with disabilities are also equipped with the hands-on skills of using computers that have been placed in all Epicenters that were constructed with the financial support from The Hunger Project around the area and the computers are associated with internet package that makes community members access the information they need in their localities.

Chikwawa and Nsanje districts are some of the districts with high number of persons with disabilities thus according to the National Statistical Office in its 2018 Population Census.