The alternative report that has been submitted to the United Nation {UN} Committee on International Covenant on economic, social and cultural rights has blamed the Malawi Government for failing to honor the international treaty obligations on disability rights.

The report popularly known as ‘Shadow report’ that has been presented by the Federation of Disability Organizations in Malawi [FEDOMA] and its 12 affiliated member Organizations of Persons with Disabilities [OPDs} has punched holes in an initial state report that was presented to the UN committee last year.

The shadow report says government is not putting much efforts in accelerating economic, social and cultural tights of persons with disabilities in Malawi

END_OF_DOCUMENT_TOKEN_TO_BE_REPLACED

The revelation comes out on the research presentation that was conducted by the researchers from the Kamuzu University of Health Sciences- KUHES, Young Researchers Forum- YRF, among other plus international Universities, which seeks to find out the evidence and knowledge on how funded public health projects have benefited people especially the vulnerable groups, persons with disabilities in particular.

During the Research for Development workshop, national and international scientists, policy makers and stake holders learnt that most public health funded projects lack the component of inclusion, the development that makes persons with disabilities failing to access health care services to the fullest.

FEDOMA was in attendance on the Research for Development findings workshop which provided the platform for an open dialogue on how best the state budget can benefit persons with disabilities in Malawi. 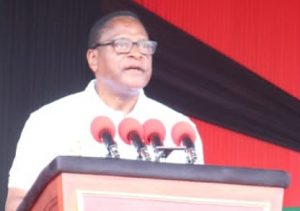 President Lazarus Chakwera says there must be deliberate measures that might be put in place ensuring inclusion of persons with disabilities in all sectors so that the Malawi vision 2063 agenda must be a reality as one of its components is ‘leaving no one behind’. He was speaking at the commemoration of the International Day of Persons with Disabilities- IDPD on 3rd December held at Masintha Ground in Lilongwe.

In his speech, Chakwera ordered the ministry of Transport & Public Works and the Ministry of Local Government that the authorities in such ministries must join hands ensuring that the construction projects are in line with the accessibility standards so that persons with disabilities must access all the public spaces.

He said, “It is disheartening at this time we are pursuing for the vision 2063, almost all of our buildings are inaccessible to persons with disabilities and that slogan of ‘leaving no one behind’ will not be achieved at all. I therefore make the directive to the Ministry of Transport & Public Works together with the Ministry of Local Government both should make sure that the awarding of contracts to the construction films must look how best that contractor would come up with a building with all accessibility standards.  This directive is with an immediate effect and must be looked into before the end of the 2022/23 fiscal year”. 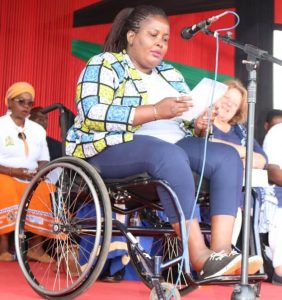 Federation of Disability Organizations in Malawi FEDOMA Chairperson of the Executive Council, Mapopa Shaba has spoken strongly against the continued use of the Handicapped Persons Act of 1971, which according to him, it violates rights of persons with disabilities.

Speaking in Lilongwe on Saturday on the sidelines of commemoration of international day of persons with disabilities, he expressed frustration with the delay in tabling the Persons with Disabilities Bill in Parliament which was drafted and presented to the relevant authorities in 2018 which seeks to replace the old Handicapped Person’s Act of 1971.

Shaba said for example, the Malawi Council for the Handicapped- MACOHA is being run without considering the rights of persons with disabilities.

“It is an issue of concern because the literature in the 1971 Act is basically medical and charity as it portrays a person with disability as someone who is sick and who needs assistance to survive. We don’t want such an archaic piece of legislation anymore,” said Shaba.

Shaba added that the 2017 National Disability Strategy is not effective as inclusion in most public institutions is not arrived at.

Sharing the same notes was Chairperson of Malawi Human Rights Commission- MHRC Scader Luis, who said most persons with disabilities are up to now not enjoying their rights to the fullest. 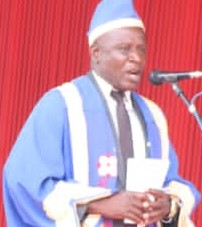 He said, “We are very much concerned with the killing of persons with albinism. This is very sad and we beg government to help us ending this barbaric act.

The disability movement in Malawi concludes the observance of the disability month which started on the 3rd November, 2022 and the disability activities reach on the climax on the 3rd December which is the International Day of persons with Disabilities set by the United Nations in 1992 and the Malawi Leader, President Lazarus Chakwera was in attendance. 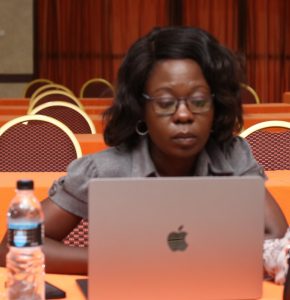 “We would like to give a round of applause to DRF for supporting the disability movement and this is not a mini achievement to us as FEDOMA and the rest of the OPDs who get the grant from DRF,” he said.

The Disability Rights Fund its headquarters Is in America and currently it is giving grants to almost 18 OPDs thus including Community Based OPDs in Malawi who run various project innervations in various districts. 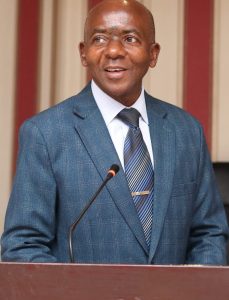 The department for disability & elderly affairs in the ministry of gender, children and community development says the much awaited Disability Trust Fund will be soon in operational as the department has hired a consultant who is finalizing putting in place  the guidelines of making full operational that will benefit persons with disabilities in Malawi

Speaking when officially opening the 2022 DRF Grantees Convening Conference in Lionde, Gideon Kachingwe, Director for the department of disability & elderly affairs said government is committed to make sure rights of persons with disabilities are fully observed. He was quick to point fingers at the Organizations of Persons with Disabilities OPDs of choosing to sideline the department rather pressuring political figures saying that all the technical efforts are in the officials in the department not the minister saying the duty of minister is to oversee the whole work in the ministry. He therefore aged the OPDs to forward all matters concerning disabilities to the department of disability as they will be fully assisted. Kachingwe however was not so sure on when the Trust Fund will be in operational saying when all is done OPDs will be informed.

“Let me assure you all that the government is in control and is making all it can to ensure that the Disability Trust Fund is benefiting persons with disabilities. I would like to condemn the growing tendency of most OPDs who choose to go to the minister leaving behind the experts in the department that tendency must stop lets work together we are here for you and the minister too is committed, “said Kachingwe.